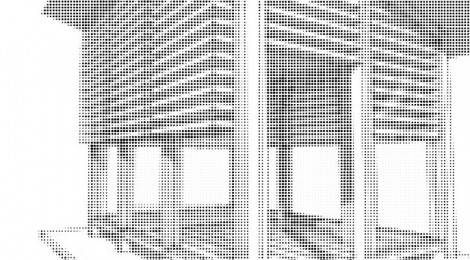 This is a doghouse design I did for Barkitecture Houston 2012.  It won 2nd place!  Underneath all the photos are my responses to a design interview.  You can learn more about the event at the link below.

Q: What was the design concept for your doghouse?

A: We wanted to create a comfortable space for the dog.  Houston is generally hot and very humid.  So we didn’t want to design a house that held in that heat and moisture.   Our concept is very airy, and allows natural ventilation to occur – and we considered this from the bottom up.  Hot air rises.  So, the floor is raised off the ground, and we spaced the floor slats so air could come up from underneath.  Also, the side panels don’t go completely to the floor.  There is a gap so wind can come in from underneath.  Since hot air rises, we spaced the side slats so air could blow through, and also escape.  Overall, we think the design is successful in this regard.  No fans, no frills, just simple air flow.  Simplicity was key.

Q: So was the construction simple as well??

A:  Absolutely not.  It was difficult, and took much more time than anyone initially thought.  But in that lies an inherent beauty as well – the design is “simply complex.” The concept behind the construction – the repeating panels, repetitively sized units and so on was simple – the execution not so much.  Because of the simplicity, we didn’t want complex connections, and we didn’t want to disturb the simplicity with bulky fastening methods.  A lot of thought and careful execution had to take place.  An enormous thank you to all the team members who helped this design come to a beautiful fruition.

Q: Why did you choose wood as the main material?

A: We imagined what a doghouse could look like with materials that already hold a dog within.  So choosing the specific wood species is a direct relation to a cedar picket fence.   The horizontal slats are all cut from cedar pickets – the same pickets you use for a fence.  The posts are treated lumber so they won’t rot when they make contact with the ground –like the posts for a fence.  It was also always intended to have renewable materials, so we felt wood was a great choice, and very easy to work with.

Q: What about the glass?  Why did you choose that as a material?

A:  For its simplicity.  The glass is a single panel that effectively covers a given area.  We felt the design needed some impenetrable panels for more protection from the weather, but we didn’t want to sacrifice the transparency we were achieving from spacing the cedar.  We felt glass was an obvious choice, and complimented the wood nicely.  Of course, it is also recyclable.

Q: The roof doesn’t have shingles or any other protection.  Why?

A: Purity of design.  We used two materials – wood and glass.  We didn’t want to introduce another material.  We thought about wood shingles, but we felt that took away from the simplicity and cleanliness of the design.  But don’t worry – we properly sealed the entire doghouse so it will effectively shed water.

Q: Were the exposed fastenings an afterthought?

A:  Absolutely not.  Nothing about this design was an afterthought.  You can see the fasteners because we didn’t want to hide the construction process.  You can see the joints in the panels, the fasteners, almost everything.  If we had covered them, whatever filler we would have used would weather differently than the wood, so eventually it would have been obvious we tried to hide it in the first place.

Q: In hindsight, is there anything you would change about the design?

A: Hmmmm, that is a tough question.  I can honestly say the final product came out better than I could have hoped.  If you’re asking if anything about the design bothers me, the answer is almost nothing.  The spacing for the floor slats is not as precise as I would have liked.  Also, we had a little too much waste, which means we could have better estimated the amounts of the materials we needed.  But if you’re asking if I don’t like something about the way the design turned out, the answer is absolutely not.  I’m thrilled with how beautifully simple the design is, and the hidden, yet inherent complexity behind the construction process.