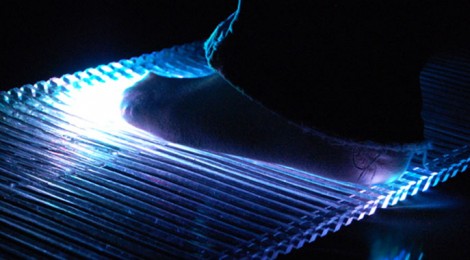 This studio was focused on response to human stimuli.  In physics we learn that for every action there is an equal and opposite reaction.  When a person walks up the stairs, not only is the person moving and pressing against the stair to propel themselves in a particular direction, but the stair in turn is pressing against the person to counteract the human forces being applied to it.  This project manifests the precise moment that a dynamic object (in this case the human foot) meets a seemingly static object (in this case the stair step).

The potential of this concept is that it creates a responsive environment that people enjoy using.  Our design process began with an in depth, diagrammatic analysis of the singular action of taking one step on a stair.  Video was taken of walking up a single stair step, and then broken down into a set of images.  These images were then diagrammed, and the shapes derived were translated into a three-dimensional surface.  The result is a surface that responds when pressure is applied by lighting up underneath the foot.  The working prototype was achieved using Arduino, which is a programming platform for designers to experiment.