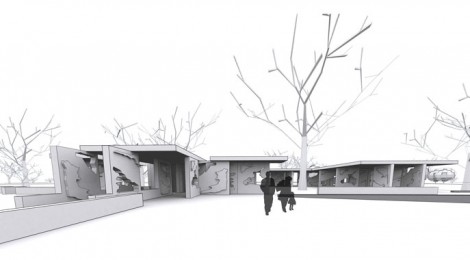 The design process for this project began with a material investigation.  My material of choice was oriented strand board (OSB).  A set of analyses and drawings were done with digital images and Photoshop, and then translated into a pattern that could be repeated.  The pattern was then literally translated into tiles.  Through 3D modeling, I discovered the idea of recess and extrusion: solid and void.  Once I brought the tiles from digital to physical, the notion of being able to alter the pattern came about.  The tiles were set in a frame, but were allowed to freely slide past one another to create different spaces within the patterning.

The tiles were then developed into a structure for a local park.  Cast concrete panels resemble the tiles made from the OSB analysis on a larger scale.  The program included a bathroom, and an adaptable gallery space.  The gallery translated the sliding notion to a set of panels that could be re-arranged for different exhibits.  Since my project incorporated solids and voids, the sink also used these principles.  A space cut through the wall of the bathroom allows space for the user to put his hands through a flowing sheet of water.