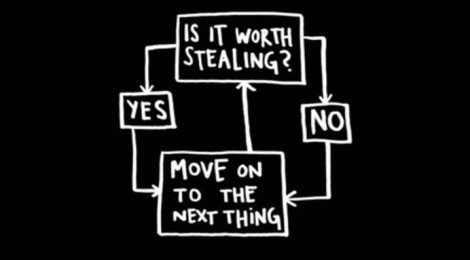 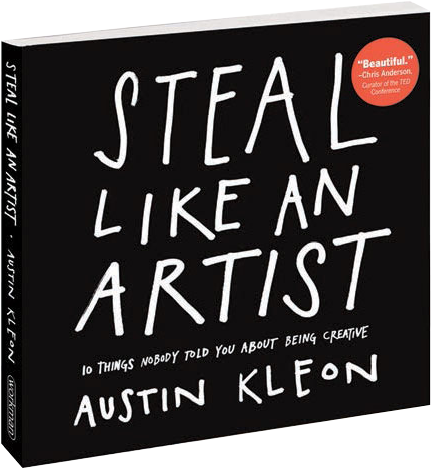 What a great read.  I’m super inspired now to start projects that have just been sitting in my head.  I admit, I am my own worst enemy when it comes to design.  Not only am I my biggest critic, but I’m also afraid to start!  This book eliminated that fear.  There is nothing wrong with having several projects going at once, which was one of the biggest reasons why I just haven’t started some things.  The other reason I had not started some projects was because I had not set myself any parameters or constraints to work within.  As Austin Kleon puts it in his book: “There is nothing more paralyzing than the idea of limitless possibilities.”

While the book is very inspirational, it’s also full of great ideas – big ideas.  I was pleased to see he shared my opinion about the computer as a tool for design.

It’s true.  I find that when I’m modeling in the computer, I’m spending probably more time ERASING things I’ve created, than actually producing things I think are worth keeping.  In fact – that’s one of my biggest pet peeves about SketchUp – it’s so damn easy to use the eraser tool.  But also – that control+z command is a fierce habit (so much so that I even find myself thinking to myself when I make a mistake in real life “Control+Z!”)

Also, as the title implies, the book is about sparking your creativity from inspiration from people you consider to be your heroes.  This is certainly not a foreign concept to me, but it was great to see all the references and quotes Mr. Kleon pulled together from very notable figures that illustrate that point exactly.  In fact, he even mentioned a speech that I absolutely love from Conan O’Brien during his commencement speech to Dartmouth University in 2011.  (It’s a bit lengthy, but you can watch it here – I don’t want to insert the video because that’s not the primary subject of this post).  The main point is that while you are copying these heroes, you’re not imitating them, but actually finding your own creativity through them.  As Conan says in the commencement speech mentioned above, “It is our failure to become our perceived ideal that ultimately defines us and makes us unique.”

In conclusion: read the book!  It’s a fast read.  I read it in about an hour.  I’m sure when you’re done reading it, you will be just as inspired as I was to get started doing stuff.

You can find the book on Amazon here.  Below is a video of one of Austin Kleon’s talks for TED.